Holyhead Breakwater Lighthouse was established at the end of the 1.7 mile-long breakwater in 1873. The breakwater, the longest in Europe, was built between 1846 and 1873.

The port of Holyhead developed during the nineteenth century.   During northerly winds, sailing ships were often prevented from entering Holyhead’s old harbour. Also, sailings were moved to the southerly side of the island for shelter in poor weather.

Improvements to the harbour were needed. The Admiralty or Mail Pier at Salt Island was built around 1821, and the South Pier just after. However, the main port was congested, and the Admiralty Pier was heavily used.

The railway also arrived in Holyhead during the mid 19th century. This influx further increased demand on crossings between Holyhead and Ireland.

The building of the Holyhead Breakwater breakwater began in 1845. J M Rendel initially supervised the project. Following Rendel’s death in  1856, John Hawkshaw oversaw the completion in 1873. A railway transported more than seven million tonnes of stone from the nearby Holyhead Mountain quarries.

The Prince of Wales officially opened the breakwater on 19th August 1873. The new breakwater, nearly two miles in length, provides a large sheltered area within the harbour.

The square tower of Holyhead Breakwater Lighthouse was completed at the end of the pier in the same year. John Hawkshaw is thought to have been the engineer to the lighthouse.

The lighthouse contained a fog bell which was later added to with rockets. This fog signal was later complemented with working with guns fired from the North Stack fog station.

The lighthouse was automated in November 1961 and monitored from the Trinity House Holyhead Depot.

The breakwater has a promenade on its top course, accessible in good weather for walkers. Today the lighthouse is the responsibility of the Holyhead Port Authority. 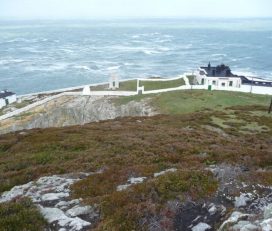 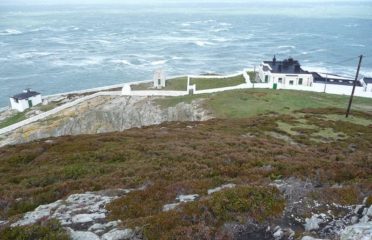