Hale Head Lighthouse was built to guide ships into the Upper Mersey.

The channel above Garston was first lit in 1838. The original lighthouse at Hale Head was established at the same time, with land being leased from the Blackburne family of Hale Hall.

The original lighthouse was a short square tower. An adjacent cottage had previously been used as a bathing house and was converted into dwellings for the lighthouse keeper and family.

On 1st January 1877 the Upper Mersey Navigation Commission was established, taking over jurisdiction for Hale, Garston and Ince Lighthouses.

Following a survey, a new taller lighthouse was built in 1906 to replace the earlier tower. The new lighthouse exhibited a fixed white light, and a fog bell sounded during poor visibility.

Hale Head Lighthouse was struck by enemy bombing during the Second World War.

Gradually the Mersey silted up along the upper reaches, and in April 1958 the lighthouse was decommissioned and sold as a private residence. The cottage was later demolished and replaced with a new bungalow.

The former optic is on display at Merseyside Maritime Museum, in Liverpool.

The lighthouse was repainted and temporarily re-lit in June 2022 to celebrate Her Majesty the Queen’s Platinum Jubilee.

The Childe of Hale

In the nearby village of Hale, John Middleton was born in 1578 and is reputed to have been 9 feet 3 inches tall. He was known as the Childe of Hale.

He was buried in St Mary’s Church, Hale when he died in 1623. Opposite the church, a tree trunk was carved in 1996 depicting the giant holding Hale Lighthouse. The tree was removed in 2013 following disease. A bronze statue was erected in place nearby.

The lighthouse and cottage are privately owned – please respect the occupants’ privacy, and do not obstruct the entrance. 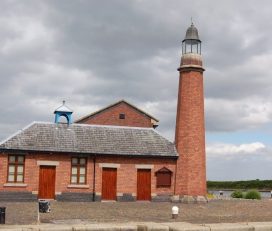 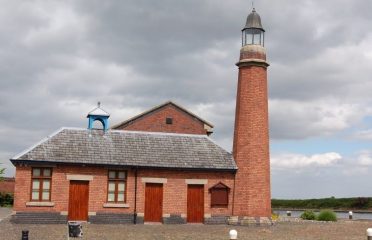