Bishop Rock Lighthouse is located in the westernmost part of the Isles of Scilly, in the Atlantic Ocean, about 28 miles off the southwest coast of Cornwall.

It was thought almost impossible to build a lighthouse here, as the rock is fully submerged at high water.

The first lighthouse was a cast iron screw pile construction designed by Trinity House Engineer in Chief James Walker. The legs were drilled into the rock.

Work began in 1847, but the tower was washed away in February 1850 before the engineers could complete it.

Walker started again, and work began building a new tower in 1851. Work was challenging due to the slope of the rock, and the lowest rock was below the low water level. The new lighthouse was first exhibited on 1st September 1858.

The workmen used the nearby island of Rosevear as their base. They built their accommodation and workshops here, as the island was relatively flat. Evidence of some of the buildings remain.

The full force of the Atlantic often caused the tower to shake, and a storm had washed away a fog bell. So in 1881, Sir James Nicholas Douglass decided to reinforce the tower with large granite blocks.

The height of the tower was increased by 40 feet. Work began in 1882 and was completed in 1887 under the supervision of William Tregarthen Douglass.

A new hyper radial biform optic was installed with two lamps and lens arrays one above the other. A hyper radial being the largest size of lighthouse optic.

They headed to the Isles of Scilly in December 1946 to record Christmas Day greetings that would precede the King’s Christmas message. They had planned to stay for only a few days, but gale-force winds and heavy seas delayed their planned relief.

The weather did not let up for nearly a month, and with five men on station, the fresh food supply of fresh food dwindled. The lighthouse keepers radioed Trinity House asking permission to break into the emergency stores of bully beef and biscuits.

“It was always the same old walls,” Ward recalled, “living completely in one room about 15ft. in diameter, and the only change of view was a trip up to the light above, and walk around the balcony or a trip down into the rock’s ‘vitals’ to look at bits of machinery… I made my own bed each day and helped with the kitchen and housework… Then there was always the polishing of the light and wireless talks with other lighthouses and the coastguard station ashore. But it was all pretty boring once the novelty wore off… we had nothing stronger than tea to drink, and towards the end the cigarettes ran out.”

On their 29th day of incarceration, the St Mary’s Lifeboat boat arrived to rescue the men who were lowered by rope towards the boat through the surf.

Here is a video showing the relief of Lighthouse Keepers in 1970 before helicopter reliefs were introduced:

Electricity was installed in 1973 replacing the paraffin lamps, and a helipad was added in 1976, allowing boat reliefs to be replaced by helicopters.

In 1975 Bishop Rock Lighthouse was featured on Blue Peter. Presenter Lesley Judd visited and almost lost her harness as she was hoisted across! (The end of the video shows keepers signalling to their wives from Longships Lighthouse to the Sennen Shore Station).

The lighthouse was automated on 15th December 1992 when the keepers were removed.

The lower section of the biform lens was removed and taken to the Maritime Museum Cornwall in Falmouth for display. On 5th February 1994, the tower doors towers were damaged by a storm and were also taken to the museum for exhibition.

The former shore station for the keepers’ families is located near Porthcressa Beach, St Mary’s.

Boat trips to the lighthouse are possible from St Mary’s. 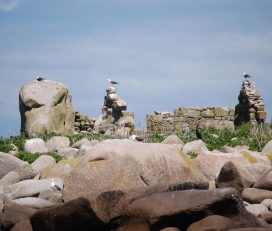 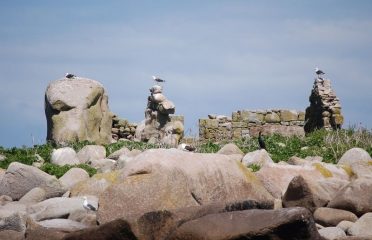 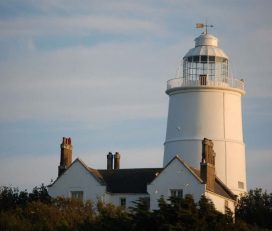 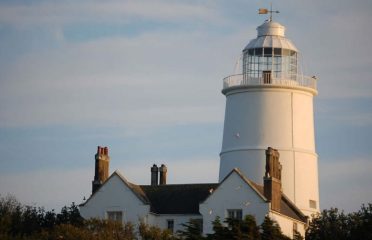 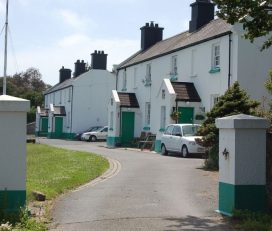 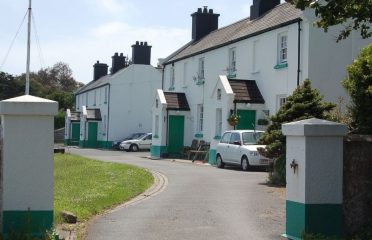 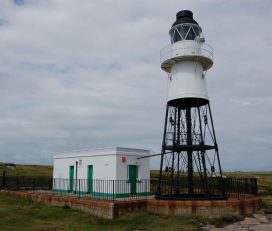 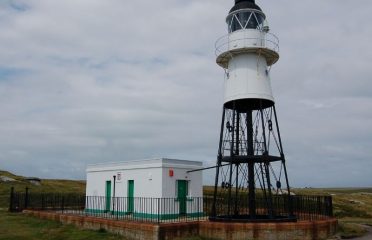 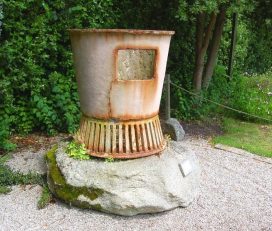 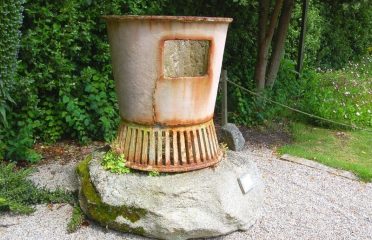 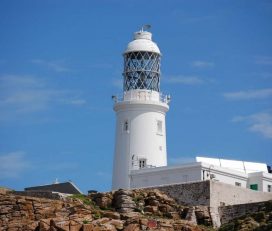 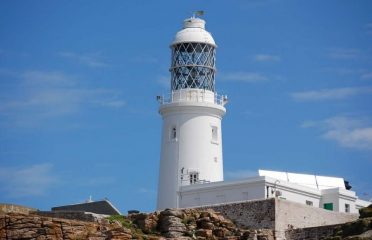